The phone was watering is not easy to be repaired. When you think it is a small problem you are wrong, Regular methods can't fix your cell phone, you must sent it to phone repair shop, because it has professional tools and methods. Vipprogrammer.com is a on-line exporter featuring China Original Universal programmer, for online shop owners wholesale dropship at very low price. It has high quality and gives you satisfactory price. Now I will sort out some solutions for you, hoping you will benefit from it.

Trouble Phenomenon:
iPhone 6 Plus touch screen does not respond after dropping into water and the display and touch screen socket has been replaced. 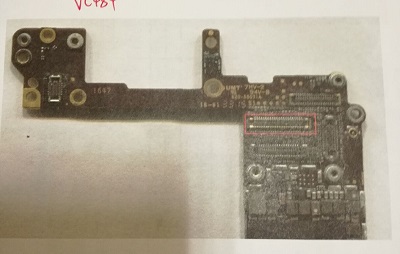 2. When the display and touch chips are assembled at the screen assembly, motherboard only supplies power to touch screen circuit, clock, reset, INT signal and SPI bus. During the repair process, when iPhone has no touch problems and the displays normally after being turned on, we do not have to measure PN5V7_LCM_MESON_AVDDH, PP5V7_MESON_AVDDH and PP5V7_LCM_AVDDH. Because they are shared by display screen and touch screen. The voltage circuit diagram of display and touch screen is shown in below picture.

3. In general, we just need to measure the diode data of part of pins of display and touch screen socket J4200. And measure the voltage of PP5V1_TOUCH_VDDH and PP1V8 after assembling display screen and turning on iPhone. The measuring points are shown as these yellow points in below picture.

6. The measurement shows that the AP_TO_TOUCH_RESET_CONN_L on display and touch screen socket on display and touch screen socket is not linked with the AP_TO_TOUCH_RESET_CONN_L on fingerprint socket. Tear up the black adhesive tape on the edge of fingerprint socket and we can see that the several components on the edge of FL4134 and C4134 are corroded. After cleaning the corroded components, turn on iPhone and get into IOS test. The touch screen and 3D function can respond normally. The corroded components are shown in below picture. 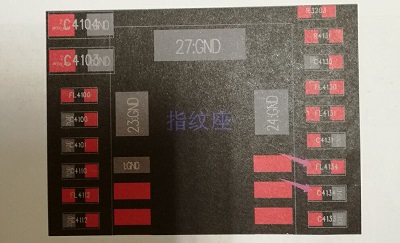