The mobile phone plays important role at our work and life. It becomes very smart and convenient. but that still doesn't mean that they won't go wrong. No, if you think so, when your phone has problem, you will not do anything. Now vipprog engineer sort out a guide to solve iphone 5s blue screen and battery percentage error. If you will try you need some tools, which also makes it safer and prevents you from causing more damage. You can choose vipprogrammer.com get some high quality phone repair tools.

ISSUE:
After the customer changed the rear case of his Chinese 32G iPhone 5S, many problems appeared. For example, it reboots indefinitely when in charge and reboots when the screen turns blue and reboots. The battery shows incorrect battery percentage, as shown in below picture. The customer recalled that when he install the screen and fix the shielded iron, he install the wrong screw leading to breaking the board. Meanwhile, at the end of battery interface there miss some components because of improper treatment. 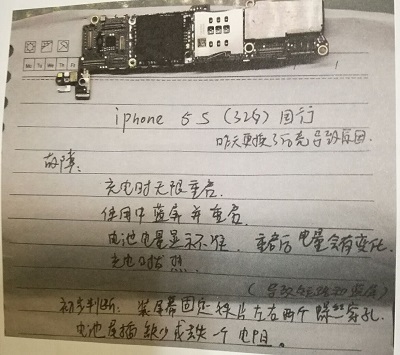 SOLUTION:
The first problem is blue screen and reboot.
1. According to the customer’s feedback and my own experience, the blue screen caused by man is due to the wrong installed screw which breaks through the screw hole and the circuit in the hole disconnects when fix the shielded iron. Remove the screw and scratch the circuit under the screw hole to jump a wire. Use insulating green UV Solder Resist to solidify it. The blue screen will not appear again. How to jump a wire and solidify green oil is shown in below picture. 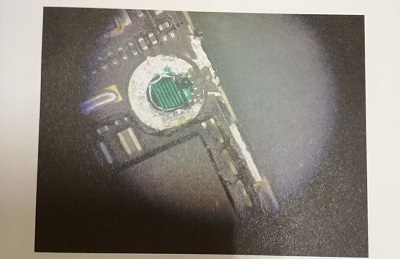 The second problem is that it will reboot when in charge and battery shows incorrect battery percentage.
2. These are caused by faulty battery voltage testing circuit. Customer said that some components missed at the end of battery interface. Observing under microscope, we can see that a component misses at the end of battery interface and the other one is going to drop off, as shown in below picture. 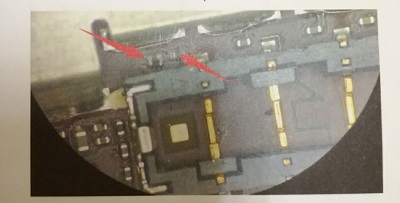 3. After checking the bitmap of iPhone 5S, we know that the missing component is capacitor C279 and the other one is inductor FL11, as shown in below picture. 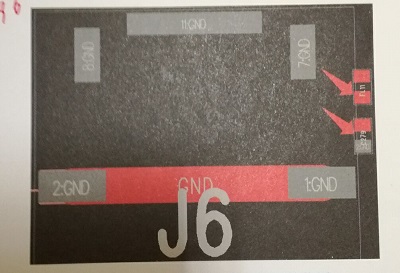 5. Fix the capacitor C279 and resolder the inductor FL11, as shown in below picture. 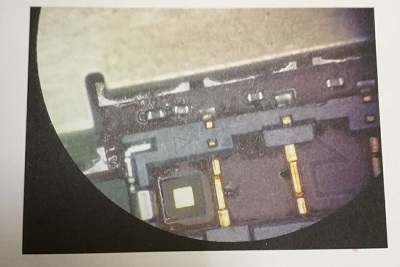 6. Then assemble and turn on iPhone. The blue screen and reboot do not happen and we can get into IOS normally. Battery shows correct battery percentage. Trouble is removed.